A fundamental aspect of data capitalism is the concept of a platform—a company with a collection of mechanisms bringing together a set of parties to interact with each other. A platform has been defined as “a business based on enabling value by creating interactions between external producers and consumers. The platform provides an open, participative infrastructure for these interactions and sets governance conditions for them”. A platform can be any avenue that facilitates decentralized interaction.

….. Platform companies are growing far faster than any other sector of the world economy. In just a few years, they acquired trillions of dollars of market capital, mostly concentrated in the US and China. The United Nations Conference on Trade and Development report on the digital economy describes the powerful position platforms hold in the economy.

“Both their high market valuations and the speed at which global digital companies have attained high capitalizations attest to the new value associated with being able to transform digital data into digital intelligence. Investors are betting on the disruption and reorganization of whole economic sectors, such as retail, transport and accommodation, or health, education and agriculture, by investing in long-term, digital-intelligence-based control of those sectors, which, they believe, will enable the generation of high profits in the future. Such disruption may involve sweeping away traditional players as well as preempting the emergence of new digital competitors. By introducing new products, services and business models, global digital companies become factors of disruption in sectors as varied as transport, accommodation, banking, education, and the media.” (United Nations Conference on Trade and Development, Digital Economy Report 2019, pp. 83)

The vast quantity of user data the platform companies gobble up every second is the chief source of these companies’ power and wealth. Individuals and organizations voluntarily (or involuntarily when they are ignorant) hand over massive amounts of data to them. The platforms systematically record all the data that passes through them. Cloud companies are also becoming huge data collection enterprises, and their large investment in infrastructure makes them difficult to compete against. All this data is machine-readable and can be mined, curated, organized and monetized.

Digital capital consists of the mechanisms that capture and monetize the data, and this is the very heart of the new digital economy as shown in the figure 9 below. 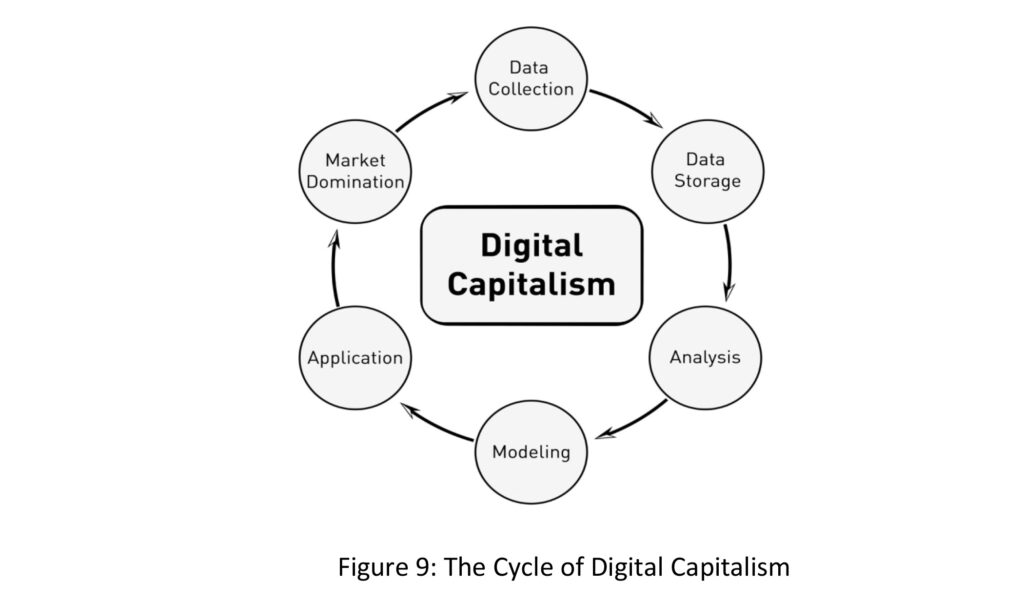 ….. Some economists and industry leaders assure us that the elimination of old jobs will be compensated by the birth of new kinds of jobs. The Luddite Fallacy states that rather than eliminating jobs, new technology simply changes the nature of jobs. When the British textile industry was mechanizing during the nineteenth-century Industrial Revolution, skilled handloom weavers rose in protest and destroyed the new power looms. They became known as Luddites, after their leader Ned Ludd. However, their fears were unrealized; productivity gains from industrialization resulted in greater wealth that was reinvested into society and created new jobs. Though the Luddites were right in the short term, they were wrong about the long-term impact of the new technology.

The pattern has repeated itself in economic history over the past two centuries. Agricultural automation in the West induced farmers to migrate to cities for factory jobs. And subsequent industrial automation led workers to move into the service sector. In each of these instances, the automation revolution went through three stages:

1. It reduced the number of old style of workers in a given sector.

2. Surplus workers migrated to other sectors and boosted production in new jobs.

3. The cost of goods dropped which raised overall standards of living.

The Luddites did see an immediate loss of jobs and suffering from wage reduction, but their future generations were better off. The question now being debated is this: Will the pattern repeat itself with AI-driven automation? If so, the latest AI threat to jobs will merely be a short-term disruption eventually offset by long-term economic gains. Or will the paradigm be different this time?

My position on this is that AI is different compared to prior technological disruptions for several reasons. For one thing, the disruption is occurring faster and more dramatically than during prior waves of automation. Because the pace of automation was slow in previous revolutions, displaced workers had the opportunity for re-training, and the education system had time to adjust and provide workers with the latest skills. Farming automation was a slow process; it took multiple generations, allowing society to adapt to the economic shift. Middle-aged farm workers could continue in their jobs, while their children went on to get factory work. In other words, it was an intergenerational shift and did not necessarily affect the workers mid-career.

A report by Bain & Company titled “Labor 2030: The Collision of Demographics, Automation and Inequality” predicts abrupt changes in the next decade compared to the slow transitions of the past. Worker displacement will occur two to three times faster than during the prior shifts from agriculture (early 1900s) and from manufacturing (late 1900s). This is because the adoption rates for new technologies have been accelerating. When the telephone was invented, it took seventy-five years to reach fifty million users; the mobile phone only took twelve years after invention to reach that level. The adoption of smartphones took only four years to double from one billion to two billion. Artificial Intelligence adoption is thus likely to achieve dramatic penetration because of its exponential adoption rates across different applications.

Many workers will be caught mid-career when they expect, and need, to work for many more years. They will be too young to retire but too old to retrain easily.

Automation will create a dichotomy between new haves and have-nots. Massive unemployment will occur simultaneously with shortages of professionals in the latest technologies. Those who are technically qualified, possess the latest knowledge, and can work competitively in the new economy will be rewarded with high-paying jobs. These will be the new elites. Unfortunately, most workers will be left behind to face unemployment or eke out a meager living.

In the imminent future, society will have to acknowledge the existence of what I call the unemployable class. Additionally, the greater longevity that results from medical advances will further increase costs for the nonproductive elderly. Income disparity will become glaringly large and foment increased stratification between social classes. The middle class might virtually disappear, leaving a small upper class of elites and an exceptionally large lower class. Labor shortages will exist at the upper end, with a surplus of obsolete workers at the lower end.

Artificial Intelligence will exacerbate economic divisions by worsening the disparity that already exists. In the Global Wealth Report 2019, Credit Suisse Wealth Institute indicates that the top 1% of the world’s richest people own 45% of the world’s wealth; it provides the breakdown for major countries. According to one report the world’s 2,000 billionaires have more wealth than the bottom 4.6 billion people combined, and the richest 1% have more than the combined wealth of 6.9 billion people.

….. Most economists like to pacify the public with the claim that new jobs created by AI will compensate for the loss of old jobs, but this assertion does not address the problem for several reasons. As stated earlier, AI’s new jobs will not be located where old jobs are eliminated, but wherever the AI industry’s innovations and implementations are located. The Oxford Economics report indicates that job losses and gains will be unevenly distributed between countries, between regions of the same country, and even between different communities in the same region. The consumers who benefit from cheaper goods due to automation will be scattered around the world, whereas the communities that lose manufacturing jobs will be locally concentrated. In fact, Oxford Economics states: “increased industrial automation will tend to exacerbate the regional inequalities that already exist within advanced economies”

….. The coronavirus pandemic will make the unemployment situation even worse for the most vulnerable people, exacerbating the problems caused by AI. One estimate is that this latest crisis could plunge another half a billion people into poverty and will adversely impact women more than men. The well-recognized gender pay gap even in developed countries like the US is likely to worsen due to the pandemic.

….. Despite these trends, a sizeable segment of millennials, especially those employed in the tech industry, subscribe to the optimistic view that AI will usher in an age of abundance and freedom for all. This attitude is an oversimplification resulting from a collective unwillingness to acknowledge reality and inability to reason with sophistication when confronted with uncomfortable truths.

To solidify my arguments, it is worth summarizing my response to the optimists. Their common counterargument to the potential devastation of AI is that the current wave of automation differs little from previous occurrences. During previous waves, machines were not replacing judgment, intuition and creativity. Artificial Intelligence is, however, encroaching even the highest levels of human cognition and intellect in fields like medicine, transportation, sports, media and the arts. Of course, some residual human jobs will remain, but these will be fewer and fewer. The open question is this: Is there a level of human function higher than what AI can replace? If so, what is it? The answers are speculative at best.

Contrary to popular reassurances by many economists, there is no guarantee that market forces will create enough new jobs to replace the old ones. Lawrence Summers, former Harvard president, chief economist at World Bank, and treasury secretary under former US president, Bill Clinton, told New York Times that we cannot stop technological change, nor can we “just suppose that everything’s going to be O.K. because the magic of the market will assure that’s true”.

Reports that do admit to the seriousness of the problem often pass the responsibility for solutions over to some unnamed billionaires. They assume large-scale altruism and philanthropy on the part of the top 1% to help the unemployed. Yet the idea of redistributing wealth from the rich to the poor through taxation is, at best, idealistic. Most proclamations on the importance of doing good fail to propose how to transform the human ego dramatically enough to make such altruistic visions real. How can we shift the rich and successful away from the intoxication of materialism and personal grandeur? The problem of limitless greed is old, and not easily solved.